Skip to Content
Home Blog Europe Germany Hohenschwangau and Neuschwanstein castles made simple: everything you need to know to plan your trip
by Angie Kunze

A pair of stunning castles, Hohenschwangau and Neuschwanstein, are conveniently located just a stone’s throw from each other. Hohenschwangau Castle was a childhood family retreat of the most tragic of characters, King Ludwig II. Neuschwanstein Castle was his own personal masterpiece. Romanticism, fantasy, tragedy, betrayal, and mystery all come to life on these two castle studded mountains in Bavaria, my most favorite area of Germany.

The castles can be easily visited as one stop on your itinerary. However if you have time for just one, it should be Neuschwanstein.

IMPORTANT: If you are touring both castles, you must tour Hohenschwangau first.

As with everything in Germany, visiting these castles is quite efficient. Yet logistical planning can be a tiny bit complicated. I have outlined some instructions to simplify things.

it’s a bit of a climb

Beautiful Hohenschwangau, looking lovely in a bright shade of yellow, is a fairly short walk uphill. Neuschwanstein, the stunning castle that inspired Disney, not once but twice, requires a bit more exertion. It’s a somewhat steep 30 minute climb. Follow the tips in this post, and you can save your legs for something else.

After picking up your tickets at the ticket office, head on up to the yellow castle on the hill! 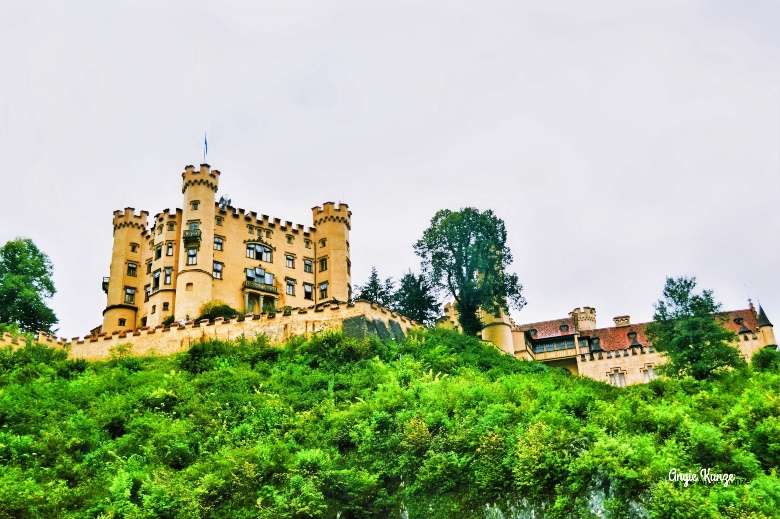 While you wait for your timed entry, you can explore around the outside of the castle. 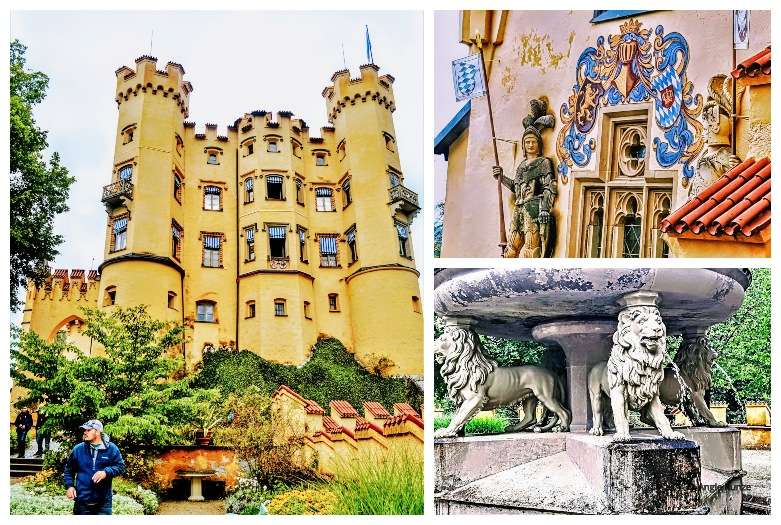 after you have completed your tour of Hohenschwangau you can head over to Neuschwanstein. Here you can see it in the distance.

Photography is prohibited inside both castles. Both are opulent feasts for the eye. Many of us have never seen the grandeur of the interior of these castles, so don’t skip the tour!

that beautiful fairy-tale castle on the opposing hill. If ever there was a castle that truly inspired the fairy tale castles of Disney, it is Neuschwanstein. A shy quiet Ludwig II dreamed up a romantic castle that the imagination of no princess could have bested. It inspired Disney’s design teams in their creation of castles in Sleeping Beauty and Cinderella. Let’s head on over.

Walk back down to the ticket office.

You may have noticed upon leaving the ticket office earlier the shuttle buses. They will take you up to Neuschwanstein castle for 2.50 euros (3 euros round trip but I have a better idea for getting down) They leave every few minutes, and will drop you off near Marys Bridge, which is located above Neuschwanstein. Be sure to take in the views from Mary’s bridge before heading down to the castle.

Mary’s Bridge is where you get your best view of Neuschwanstein.

This is the view from the bridge: 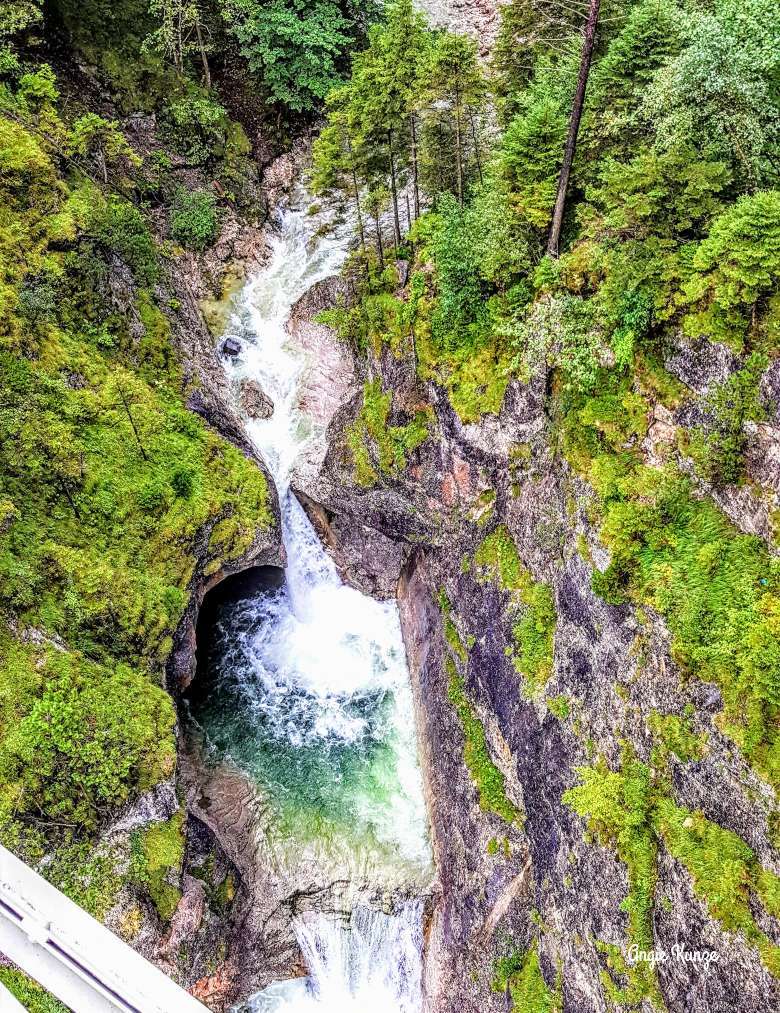 The gorge below Mary’s Bridge

The following are views of both castles from the path between Neuschwanstein and Mary’s bridge. 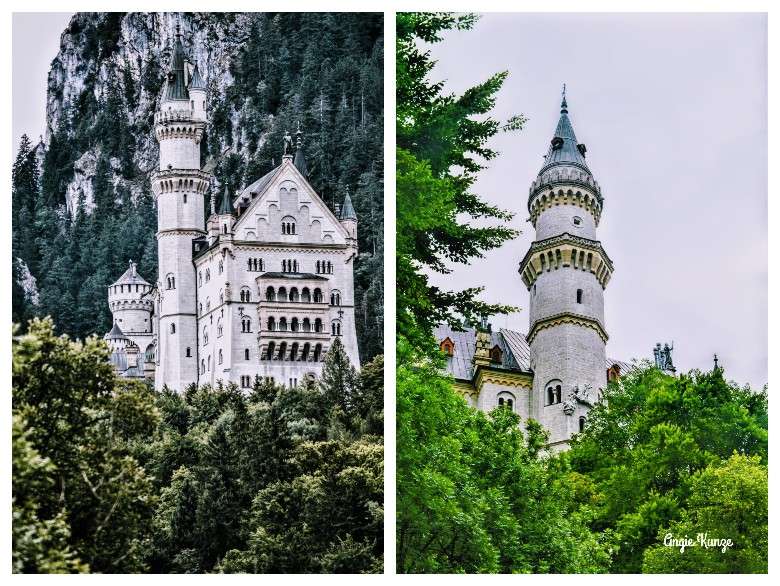 Now head downhill to the castle itself. Neuschwanstein Castle is visited by 1.4 million people per year. Only about 1/3 of the interior was finished at the time of Ludgwig’s death, and construction ceased at that time.

Be sure not to miss:

After the tour you can view a 13-minute informative video. Don’t miss the kitchen downstairs. There is also an upper courtyard, not covered on the tour, where you can see more of the exterior of the castle.

Ludwig had plans for future expansion of the castle. Had he lived, this is what the castle may have eventually morphed into (from the castle website): 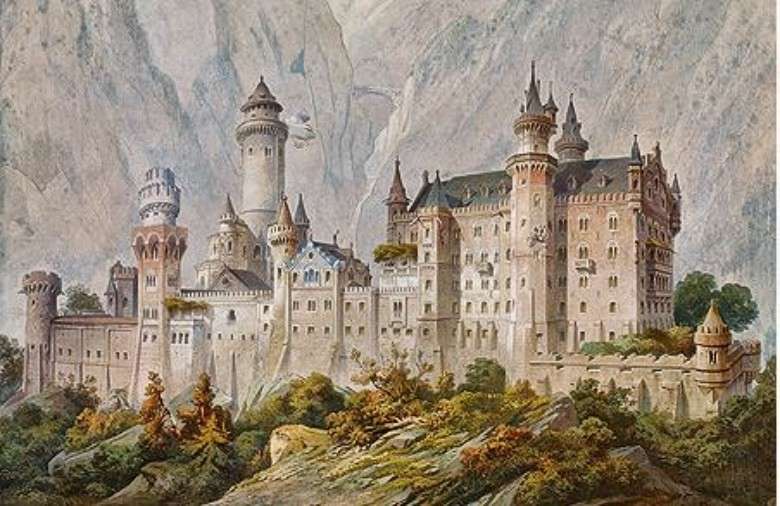 There are a couple of options for tasty and affordable food. Here’s what we found to eat, just a little ways down from the castle, let your nose be your guide!

My Imbiss (snack) food: a hamburger and pommes mit curry and mayo.

The husband’s meal from the restaurant just round the corner: brat with German kraut and potato salad

You can either walk down to the parking lots from the castle, or for just 3.50 euros, take a horse drawn carriage ride. You can take the carriage round trip. We opted for the bus up, and the carriage down. (carriages also run to Hohenschwangau, but it just didn’t seem worth it since the hike up is quite short.) Purchase tickets from the carriage driver.

It is highly recommended that you pre-book online. All tickets come with a timed entry. Reservations should be made at least two days in advance. Reservation fees are 2.50 euros per ticket. We found ourselves enjoying our little mountain in Switzerland so much that we decided to miss our castle tour, and try again the next day. We were only out 5 euros.

If you miss your timed entry, you won’t get in. To tour both castles, YOU MUST DO HOHENSCHWANGAU FIRST. You’ll get a tour time for Hohenschwangau, and then be given a tour time for Neuschwanstein 2 hours later. YOU MUST PICK UP YOUR TICKETS ONE HOUR BEFORE YOUR DESIGNATED TOUR TIME. Tickets for both castles can be purchased online from their ticketing site.

cost to visit the castles:

Neuschwanstein 13 euros, Hohenschwangau, 18 euros, under 18 years are admitted for free but will need a free ticket. There is also a ticket that includes entry to the Museum of the Bavarian Kings.

Road signs refer to the castle as Konigsschlosser not Neuschwanstein. There are several parking lots. 6 euros to park. Here’s a helpful map for getting your bearings. (Marienburcke is Mary’s Bridge.) 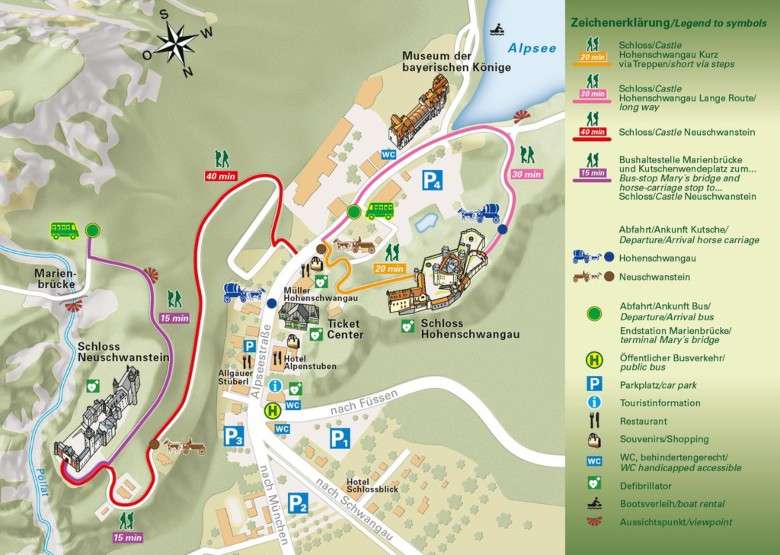 Wait outside the castle until your ticket number lights up on the entry board. YOU MUST ENTER WHEN YOUR TICKET SHOWS ON THE BOARD. If you do not, you will miss your entry window.

inside the castles are free. Everywhere else you pay.

I was very taken with the tragic story of King Ludwig, sometimes called the Swan King, or the Fairy-tale King. I found myself relating to him in many ways.

Ludwig was a shy dreamer, a private person who took advantage of his position to do what he may, and lived a reclusive life in a fantasy world of his own. He was disposed to staying up all night, and sleeping all day.

Unlike many kings throughout history, Ludwig seemed to have a deep gratitude to God for his fortune in life, and felt that his kingship was a gift from God. The throne room in Neuschwanstein is not dedicated to himself, or other sovereigns, but a dedication to God’s and his grace.

Composer Richard Wagner, a close friend of the king’s, wrote of him after their first meeting. “He is unfortunately so beautiful and wise, soulful and lordly, that I fear his life must fade away like a divine dream in this base world … You cannot imagine the magic of his regard: if he remains alive it will be a great miracle!”

Yes, a beautiful tragic figure, destined for a tragic death. Ludwig was low on funds, and at odds with his own ministers, as well as creditors who were threatening to seize his properties. (He paid for his projects out of his own funds, not state funds.) His own ministers sought to have him declared incompetent, and place his uncle on the throne in his stead. Because he didn’t exhibit the expected amount of concern over his dire financial situation, they were able to convince a doctor to declare him mentally incompetent. Although there was never any evidence of mental incompetence, outside of the fact that he was spending money like mad, those who sought to overthrow him used bribery to elicit false testimony against him. Shockingly, none of the panel of psychiatrists who signed off on the kings insanity, ever even examined him in person.

He was, never-the-less, then removed from his castle, and placed under guard. Ludwig, a very strong swimmer, was found dead in a lake a day later, along with the psychiatrist who had certified him as insane. The water was merely waist deep, and upon examination, no water was found in the king’s lungs. The psychiatrist’s body showed trauma to the head, and signs of strangulation.

The kings death is shrouded in mystery. It is not known if he was murdered, or committed suicide, but I find, given the evidence, suicide was unlikely. He was only 40 years old at the time of his death. Neuschwanstein had been under construction for 17 years. Still covered in scaffolding at the time of his death, the king had only lived in his masterpiece castle for a mere 172 days.

What really struck me about his story is that he created what is probably the most recognizable site in Germany, yet died before having the opportunity to really enjoy it. I find it to be a little heartbreaking, and incredibly sad.

Read here about other palaces commissioned by King Ludwig.

Another popular spot in Bavaria:

Inspiration for this trip, courtesy of Rick Steves “Germany” travel guide. Get the book!!!! Why I love Rick’s books: If I could tell you one thing, and one thing only about his books, I would share with you Rick’s own words. He “gives you all of the information & suggestions necessary, for wringing the maximum value out of your limited time and money!” and that my friends, is exactly what your goal should be.

Want to hear more about my travels around Germany and the rest of our amazing planet? Then you might be interested in my Germany Travel Page, and be sure to submit your email address to my subscriber sign up at the end of the page to be the first to know when a new blog publishes!