One could spend the better part of a day in Wamego City park, exploring and relaxing. The park was quiet, peaceful, and really quite stunning!

According to the “Explore Wamego’s History” pamphlet, “The pond in City Park is shaped like a whale, and once served as the public swimming pool.” The eye of the whale is the island with the statue, seen below. 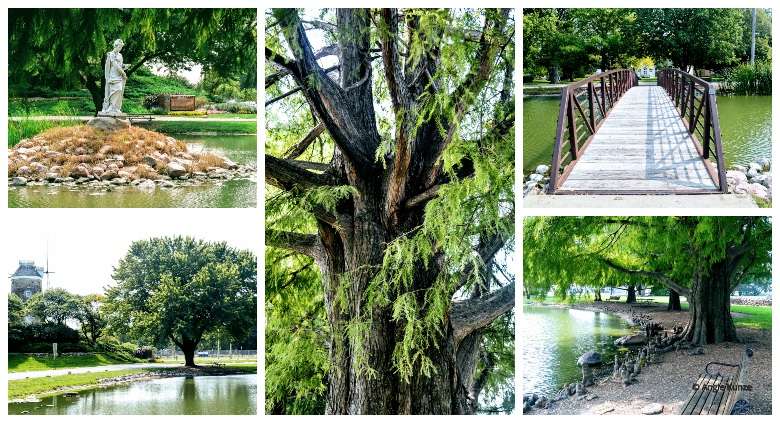 One of the most recognizable landmarks in Wamego is the old Dutch Mill. Schonhoff Dutch Mill was built by a Dutch immigrant to the area, and is listed on the National Register of Historic Places. It was built in 1880’s, and moved to town in pieces, with 35 horse-drawn wagons, in 1924. Try to spot Ceres, goddess of grain, looking out from the stone walls of the mill. 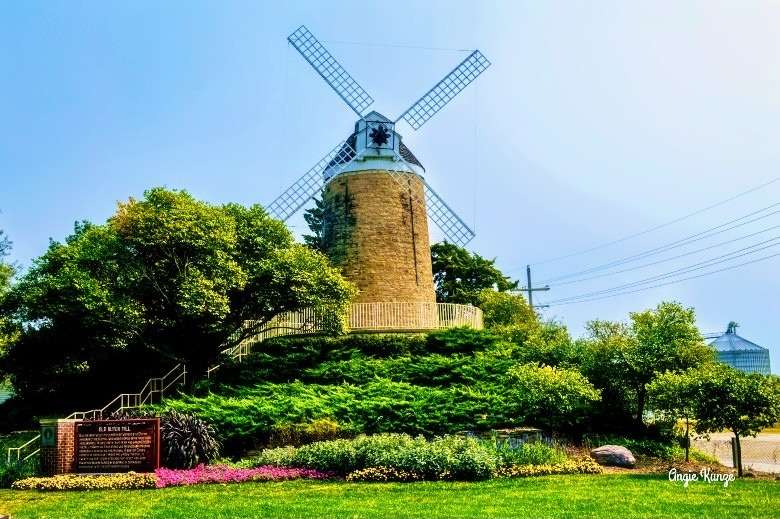 The Wamego Historical Museum, a complex of several historical buildings, is also housed within City Park. Just a few of the things displayed in the main building: old military items, a stuffed Buffalo named Abigail (read about her story inside, or let one of the lovely ladies in the museum tell you all about her,) items from the 1893 World’s Fair, a working 1950 Chrysler coupe (Walter P. Chrysler, the founder of Chrysler Corp was born in Wamego), a 1899 hand- pulled fire wagon, a Victorian bedroom, a restored 1899 buggy, paintings from local artists, and a country kitchen with old fashioned household items.

These are a few of the items in the stone building, which is pictured below: an Edison phonograph (it still works! ask to hear it played!,) railroad memorabilia, tool, farm and printing equipment and grindstones from the old Dutch Mill.

An authentic log cabin. It was built in 1840, and lived in until 1950! Take a peek inside, and see how folks lived on the prairie, many years ago.

They also have a one-room schoolhouse. The While Chapel School was built in 1882. Take a peek inside to see the classroom setup.
Also located in the park, but not pictured, is the first jailhouse in the county. 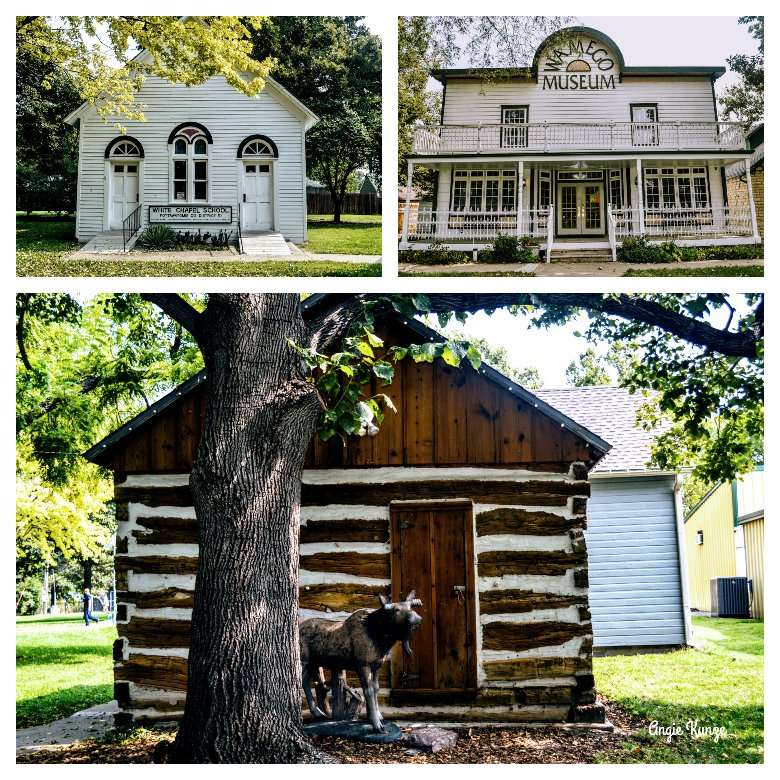 He was just begging me to take a picture with him.

I never got the scoop on this gun, but it sits just outside of the museum building complex. 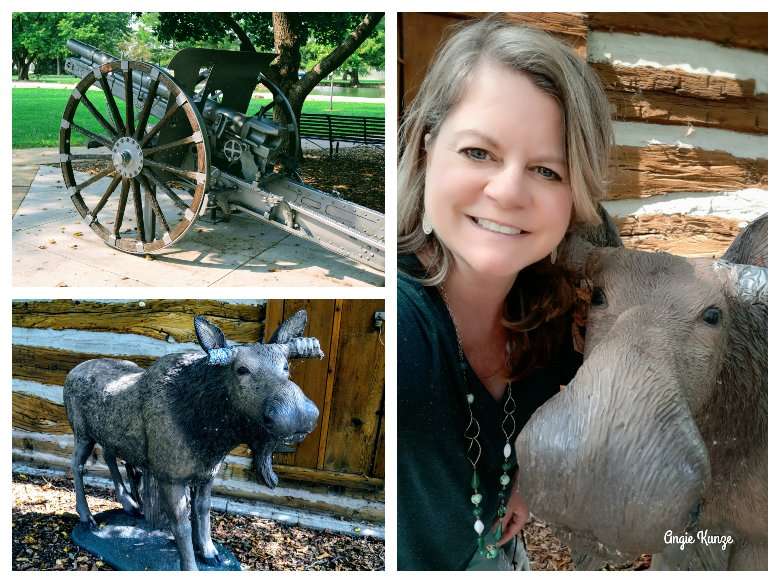 On the other side of the park, in the northeast section, is a veterans memorial, that includes the Wall of the Fallen. Here you will find the names of local heroes, who sacrificed all. Veterans are listed from World War I, World War II, Korea, Vietnam, Operation Enduring Freedom, and Operation Iraqi Freedom. 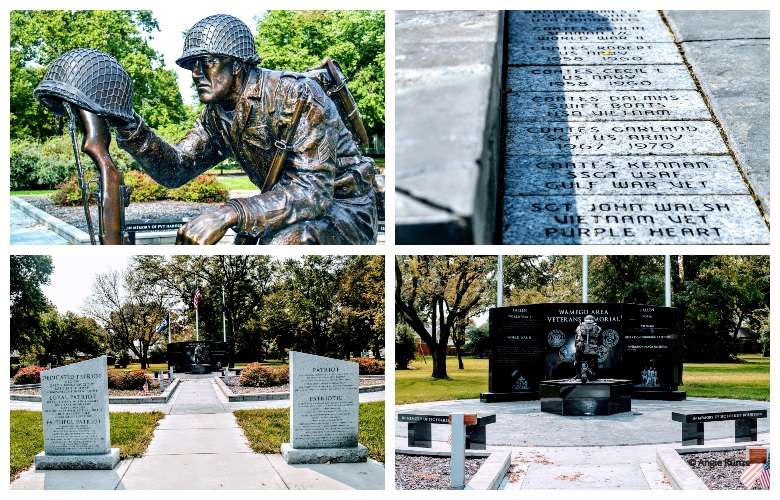 this statue is titled “Duty Called”

(Near the war memorial, is where “Patriotic Toto” can, fittingly, be found.)

Don’t forget to check out the tulips in the park in springtime! 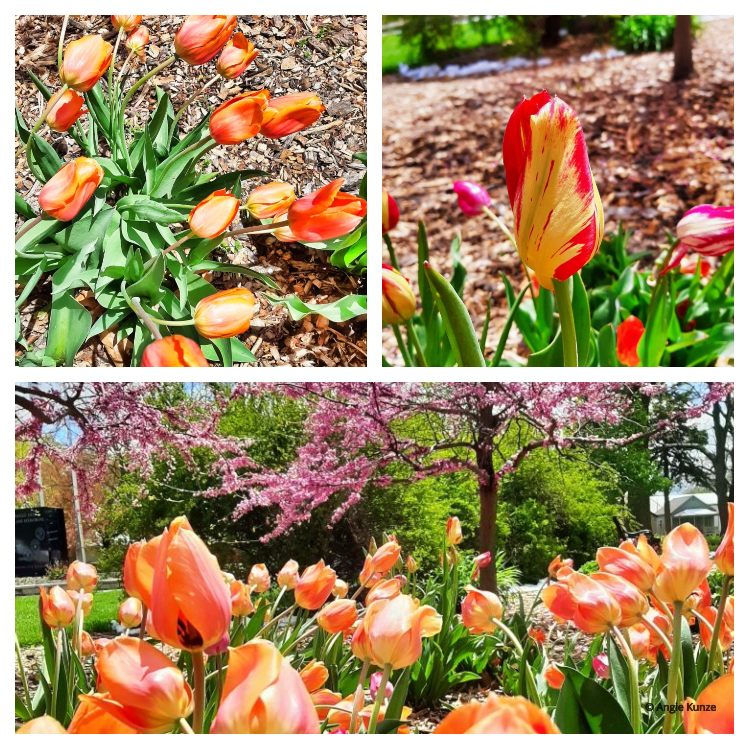 There is also a children’s train that runs through the park.

I was so impressed with this park. It is something a much larger town would be proud to have. I think I’ll take a book and go back………

If you are looking for more to do in Wamego, check out my my titled “Off to see the Wizard, in Wamego Kansas, because sometimes, there really is no place like home!” (coming very soon!)

Home on the Range in Kansas, at Plumlee Buffalo Ranch

I’m off to see the Wizard, in Wamego Kansas, because sometimes, there really is no place like home!

Want to hear more about my travels around the U.S. and the rest of our amazing planet? Be sure to submit your email address to my subscriber sign up at the end of the page to be the first to know when a new blog publishes!